A European Just Transition for a Better World 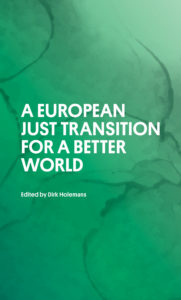 The book is available to order from the publisher, London Publishing Partnership. E-book coming later this year.

PART I: Setting the Stage

Just transition in the climate agenda: from origins to
practical implementation, Joaquín Nieto

Different perspectives on a just transition: from decent jobs in a greener society to a good life for all within planetary boundaries, Dirk Holemans and Elina Volodchenko

To conclude: our work has only just begun, Dirk Holemans and Adrián Tóth

About the editor and authors

Whether we are thinking about the evolving climate crisis, the urgent need for geopolitical energy autonomy or the detrimental impact of the extractive economy on communities and nature around the world, it is clear that Europe faces a crucial challenge: it needs to transition its economy incredibly quickly towards one that provides everyone with the opportunity to live a good life within planetary boundaries. But the faster one needs to change, the ­greater the risk of people and regions being left ­behind. The development and implementation of a just transition is therefore essential for the times we are living in. What kinds of policy and funding do we need to make the transition happen in an equitable way, ensuring that the fundamental rights of all are guaranteed in an inclusive society? And how does this translate into the divergent realities of different regions in Europe, and in the Global South?